Balancing and proportionality in admissibility decisions

How do we predict judges’ decisions on the admissibility of improperly obtained evidence?

Some lawyers think it all depends on who the judge is, and what the judge had for breakfast.

But really, prediction is quite easy, at least for lawyers competent in this area of practice.

“if the Judge finds that the evidence has been improperly obtained, [the judge must] determine whether or not the exclusion of the evidence is proportionate to the impropriety by means of a balancing process that gives appropriate weight to the impropriety and takes proper account of the need for an effective and credible system of justice.”

Points to note concerning the method are: (1) it is a proportionality determination, (2) carried out by means of a balancing process. Further, (3) appropriate weight must be given to the impropriety, and (4) proper account must be taken of the need for an effective and credible system of justice.

We can’t give this any meaning until we see how it is applied in practice. But structurally, at least we know that there is balancing, proportionality, and importantly point (4) which is the decision criterion. It is all decided against what an effective and credible justice system requires.

But again, we need the judicial decisions to reveal what this means.

There are two kinds of precedents here: weight precedents and proportionality precedents.

You might find it easiest to consider the whole thing diagrammatically. Not all lawyers need the assistance of diagrams, but I certainly do.

For each axis there will be movement to a higher or lower position as relevant matters are taken into account. For example, the logically first consideration on the admission axis will be the starting point for sentencing, but movement down from this may be required if the evidence is not particularly important to the prosecutor's case or, more significantly, if the evidence is unreliable. And on the x-axis, a serious impropriety might be reduced in weight by considerations of urgency or public safety.

Experience warns us that the x-axis will need to carry more information than the y-axis, so we can stretch it out a bit to make room. The rectangular field, bounded on two sides by these axes, can be thought of as a field of balance points.

This field of balance points will be divided into an area of admission points and an area of exclusion points. There will be a boundary between these points, and the shape of that boundary line will be a visual representation of the decision criterion, point (4) above. The shape of the boundary will be revealed by decided cases.

And yes, it has been. Although different lawyers, reading the cases and coming to their own understanding of them, might come up with differently shaped boundary lines, here is mine: 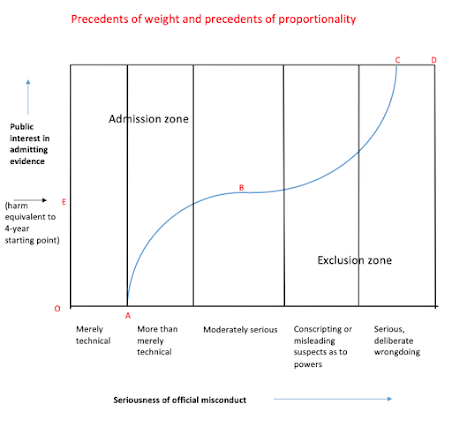 I like to think it reveals this pleasing curve because the outcomes of the decision process have been pleasingly rational. There are, inevitably, a few cases that don’t fit the pattern, and they can reasonably be said to have been wrongly decided. There are also some cases in which the weighing process has not been carried out consistently with the logic of binding precedents, but although wrongly reasoned they are usually correctly decided insofar as their proportionality outcome is consistent with the pattern of precedents.

Walking through the diagram, we have:

O to A: the merely technical nature of the impropriety is insufficient to ever result in the exclusion of evidence.

A to B: low level impropriety and low level public interest in admission: usually the result will be exclusion of the evidence. The line A-B is not straight, and it is bent to increase the exclusion zone in this part of the field.

B is the flattish part of the boundary line, reflecting the distortion of the field that occurred because we stretched out the x-axis a bit. It corresponds to point E on the y-axis. Broadly, if the starting point for sentencing, based on the prosecutor’s summary of facts (or on the state of the evidence at the time the issue has to be decided), would be in the region of four years’ imprisonment or more, the offending can be called - in this context - serious. There are exceptions, where public interest concerns require the offending to be regarded as serious even though the starting point would have to be lower because the statutory maximum penalty is relatively low. These cases can be given appropriate weight on the y-axis as exceptions to the four-year guide.

C to D: some improprieties are too serious for evidence obtained as a result of them to ever be admissible, regardless of how serious the alleged offending is. The boundary line between the admission and exclusion zones reaches the top of the field before the top right corner. This can be thought of as a representation of the “cuts both ways” description of offending of high level seriousness. [1] Such offending favours both admission and exclusion, and long-term considerations of the repute of the justice system lead to exclusion prevailing.

Of course, there is much more to be said about this. [2] But my point here is that diagrams can help to reveal the underlying rationality of balancing and proportionality decisions.

[2] For much more, see my perpetually draft paper on this site. Recent updating of that paper has been difficult because of the caution required by suppression orders and the increasing of court backlogs. But I can say that the pattern of precedents has continued up to the present.

Don Mathias
I practised as a barrister from December 1978 to retirement in February 2018. In 1980 I completed my Ph.D. in criminal law. I have taught Advanced Criminal Law at the University of Auckland, and am the author of "Misuse of Drugs", our textbook on drug offences which is available in hardcopy and also electronically by subscription from Thomson Reuters. I am also a contributing and updating author of "Adams on Criminal Law", and a joint author of "Criminal Procedure in New Zealand" (Thomson Reuters, 3rd ed 2019). I have given seminar papers for the Auckland District Law Society and the New Zealand Law Society, and have had many papers published on criminal law and evidence topics.

Introduction to this site