If you’re on holiday now, as I am sure you think you should be, it can only be helpful for me to share my favourite holiday reading. This is not to indulge in autobiography, just to indulge in indulgence.

My holiday reading, for at least 10 years from the early ‘90s, was enlivened by three authors who each produced a new novel annually. Robert G Barrett, Kinky Friedman, and Donna Leon. Barrett has departed the planet, Friedman seems to think his oeuvre is complete, and Leon is still at it.

Her latest, Unto Us a Son is Given, I have just finished. It is the best-written of all her (my count) 29 novels. She has toned down her tendency to preach, although there is occasionally a preoccupation with the sexually unusual. Often she picks up on current concerns in Venice, but this one isn’t particularly localised in that way. An entertaining read for people who want to be reminded of Venice.

The lawyer in me finds fault with this sentence at the end of Chapter 7:

“The man walked through the door and pulled it closed.”

See what I mean? This is a difficult sentence. The man walked through the doorway, not through the door which is the thing he pulled closed. Polysemy yes, not “wrong” but distracting. "Exit, pursued by a bear" indeed, Mr Shakespeare.

Sometimes I wonder too about her accuracy, or at least her choices. For example, she has her protagonist walk, at the beginning of Chapter 8, taking his usual route, to Rialto from his office at Rio San Lorenzo, via Campo SS Giovanni e Paolo, whereas one would have thought it more convenient to get there via Campo Santa Maria Formosa. I’m not showing off - anyone can use a map, but, to be frank, I find it more convenient to go that way.

But I can show off: a current concern in Venice is the route taken by the large cruise ships, one of which got out of control last week and injured some Australians and a New Zealander (and for a reasonable assessment of the incident, see the magnificent blog by Erla Zwingle). They go past my view of the lagoon several times a day ... 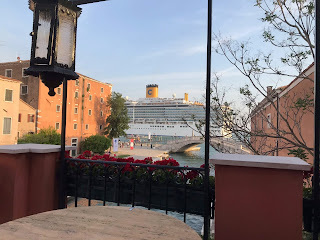 Kinky Friedman is by far the wittiest of these three, and of many others. He sets most of his stories in New York, with a cast of characters closely resembling his real-life friends, and starring himself as a private eye. One, Ratso, appeared in Martin Scorsese’s Rolling Thunder Review (Netflix), and although he seems not to have particularly endeared himself to Dylan he does mention Kinky Friedman as one of the three great song writers. You only have to hear his “They Ain't Makin' Jews Like Jesus Anymore” to know what Ratso means. Friedman’s description of Ratso in The Love Song of J Edgar Hoover, p 85:

“... rumours of his sartorial improvement had been greatly exaggerated. He still looked pretty much like Ratso. Pink trousers with Elvis Presley song titles scrawled all over them in hot purple. Unfashionable and unpleasant-looking racoon coat and coonskin cap with the creature’s head attached, eyes sown shut. Antique red shoes which, I knew from past experience, had once resided on the wheels of a man who had gone to Jesus.”

Ratso was smoking a cigar, and Friedman comments on its high quality. Ratso replies:

“ ‘Yeah. These are top-drawer. Sorry I don’t have another one to give you. My lawyer got this out of a special humidor that was given to him by a former client.’
‘I’m glad to see they’re good for something.’
‘Humidors?’
‘No,’ I said. ‘Lawyers.’ ”

I find that Barrett and Friedman are re-readable, but Leon, although enjoyable for fans of Venice, is more of a oncer.


Well, it’s 28 degrees in Venice as I type this. All one can do is head for the fridge for another of those cold bottles. I left and closed the door.

Update April 2020: In her latest, Trace Elements, Leon is more competent with doors. For example, Chapter 19 page 188: “At the door, he stepped around and ahead of her, pulled it open, and closed it after them.” But this raises something I found a bit irritating about this novel: there is too much detail about small things, and this limits our opportunity to exercise our imagination. At least there is no walking home via Campo SS Giovanni e Paolo (see the more rational route described in Chapter 8, page 64). Still, elaborate descriptions can have a point. For example, see the the eating of dinner in Chapter 7, page 55-57, which includes “Brunetti selected a few slices of tomato, set them on his plate, and added a few leaves of basil: that done, he quickly speared basil, mozzarella, and then a slice of tomato.” The colours of the Italian flag, we are told.

Attention to eating techniques occurs in many novels, of course. The genius Don De Lillo in White Noise, Chapter 23, page 175 gives us: “We watched him use his spoon to mold the mashed potatoes on his plate into the shape of a volcanic mountain. He poured gravy ever so carefully into the opening at the top. He then set to work ridding his steak of fat, veins and other imperfections. It occurred to me that eating is the only form of professionalism most people ever attain. … He immersed a piece of steak in the gravy that sat in the volcanic depression, then put it in his mouth. But he did not begin chewing until he’d scooped some potatoes from the lower slopes and added it to the meat. A tension seemed to be building around the question of whether he could finish the gravy before the potatoes collapsed.”

Whereas Leon uses the image of the flag for no particular reason, De Lillo's volcano evokes his novel's Airborne Toxic Event and its theme of Death.
Posted by Don Mathias at 10:52 pm

Haven’t we seen it all before? A person wants something, they are refused with reasons. They make another request, supposedly in the light of those reasons, and they get what they want even if the second request is flawed.

This must be a psychological thing on the part of the decider. It might be a simple planning issue - whether to give permission for a helicopter landing site, for example, or a deportation surrender matter that the Minister of Justice has to decide. It’s a sort of regression: a person who is criticised on one performance of a test, is expected - even assumed -  to do better on a further similar test, but instead they tend to regress to their average performance: see Daniel Kahneman, Thinking, Fast and Slow.

A spectacular example of the latter, deportation, occurred in Kim v Minister of Justice [2019] NZCA 209. The Minister ordered deportation. The High Court on review said the Minister’s decision was flawed and referred the issue back. The Minister considered more evidence and ordered deportation again (cf, Kahneman’s repeated test), and the High Court on review said OK, you got it right this time (cf, Kahneman’s optimistic expectation of improvement), but on appeal the Court of Appeal said, no, High Court, although you were right with the first review, you got the second review wrong. (This is another regression: the High Court’s good performance of the first review was followed by a poorer performance of the second review.) The Court of Appeal ordered the Minister to reconsider the matter with particular reference to specific points (listed at [278]).

Wearing a decision-maker down with repeated applications, a practice learnt very early in life, is successful often enough for it to be an enduring behaviour. At least the Court of Appeal in Kim didn’t trouble the High Court by remitting it back, instead it left it with the Minister (a different person now) to say, “Oh, merde, not this again.”

Kim is particularly interesting for its observations on information about the criminal justice system in the People’s Republic of China, and for its recognition that a real risk that the person would be subject to an unfair trial is sufficient to refuse deportation (at [176]-[180] and [278(e)]).

Don Mathias
I practised as a barrister from December 1978 to retirement in February 2018. In 1980 I completed my Ph.D. in criminal law. I have taught Advanced Criminal Law at the University of Auckland, and am the author of "Misuse of Drugs", our textbook on drug offences which is available in hardcopy and also electronically by subscription from Thomson Reuters. I am also a contributing and updating author of "Adams on Criminal Law", and co-author of "Criminal Procedure in New Zealand" (Thomson Reuters, 3rd ed 2019). I have given seminar papers for the Auckland District Law Society and the New Zealand Law Society, and have had many papers published on criminal law and evidence topics.